Sacred places in a small world 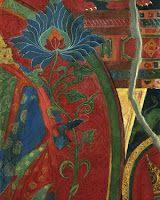 Two weeks ago, I stopped in to the Center for Photographic Art in Carmel to see the lovely and thought-provoking work of Mary Daniel Hobson. While there, I met a gentleman photographer who was discussing his exhibit, going up on Friday, May 30: Buddhist Earth: Sacred Places, Sacred Work.
The funny thing was, when I gave him my business card he did something people often do in my village when they learn my name—Oh, do you know Toby Rowland-Jones? Ah yes, my famous husband, Toby. Turns out that the photographer (and former oceanographer), Kenneth Parker, engaged in shenanigans with my husband (and thousands of other celebrants) at Burning Man several years back. 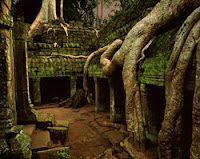 Ken Parker has this amazing job, the stuff of fantasies: he travels around the world, trekking and kayaking, photographing sacred spaces co-created by both humans and Mother Nature. Sometimes it's the Mother's hand alone that he gracefully exposes for us. All elements harmonize in his exquisite compositions, and his images etch themselves indelibly on your soul. 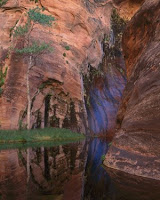 With boundless enthusiasm and a debonair smile, Ken loves both the work he does and the result: “When I see a look of sheer delight in someone who really appreciates and understands my work, I am satisfied in my core. I love that moment of understanding, transmitted cleanly and passionately. It’s a consummation of all that I do, given as a gift to another.” 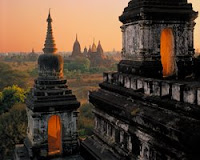 He has mastered the subtle timing required to elicit intense color from the prayerful quality of perfect light. His technique is well suited to Tibet and Burma, where simply being among the temples, frescoes, and countryside inspire a meditative state. Ruth Bernhard, one of the last century’s greatest photographers, commented that, “The way in which he works with the light is simply inspiring. It feels as if he has an arrangement with God.” 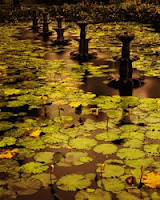 My favorite part of the opening reception took place on the patio outside the gallery, where scores of people milled about, all in their finery. Three Tibetan monks, Dzogchen Masters from the Vajrayana Foundation, and their entourage, were there to bless the exhibit and talk a little about the frescoes. In their saffron and burgundy robes, small of stature, and smiling, they stand out in the crowd. Suddenly, I’m shy, but introduce myself to Lama Sonam Tsering. I try out his name a few times to get it right, and we grin sympathetically at each other. With that mystical happy presence monks have, I feel more seen by this man than by anyone else there. We could talk and smile together forever.

His home, the Pema Osel Ling Tibetan Center was recently threatened by the Summit Fire in the Santa Cruz Mountains. A few buildings were destroyed and they were all evacuated. The Saturday following the opening of Buddhist Earth, Ken arranged for them to spend the day at Esalen Institute, as visiting dignitaries in need of a rest. Sonam’s glass is empty, so I offer him some of the red wine in my plastic cup. Sure, he says, and smiles, but stops me from pouring too liberally. After shaking hands, and bowing slightly to each other, he goes inside to begin the ceremony.

The last time I'd chatted with a Tibetan monk was after a meditation session at a friend's home in Big Sur. As we enjoyed a delicious lunch together beside the pool, I asked him about the Buddhist concept of desire as something to be overcome. To me, desire is about pleasure and why should we let go of wanting pleasure? “Ahh,” he responded, “Pleasure is good. It’s fine to have pleasure, no problem. It’s when you desire your pleasures that you will have difficulty.” When I share this story with Ken and Dennis High, the upbeat, innovative curator of the Center for Photographic Art, they laugh, "Yes, we are all so busted on that one!" 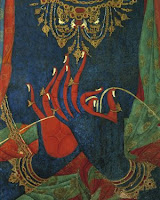 Buddhist Earth runs at the Center for Photographic Art at Carmel’s Sunset Center through September 30. The Gallery is open Tuesday - Sunday from 1pm to 5pm. Prints of Ken’s photographs are available for sale at the nearby Weston Gallery. The exhibit in a way is a forerunner to his book, now five years in the making, about the Kingdom of Mustang (pronounced Moo-stang) and will show the Western world details of Tantric frescoes never seen before. Via the American Himalayan Foundation, the same Italian crew that worked on the Sistine Chapel has coordinated a massive, ten year temple mural restoration project, with teams of Tibetans and Nepalese removing centuries of yak butter soot from the frescoes with solvent and cotton-tipped swabs! The AMF is also working to preserve the centuries old Buddhist temples of Mustang themselves, crumbling from seismic events and advanced age.

On the edge of the Tibetan plateau, due north from Annapurna, the Kingdom of Mustang was a part of Tibet that the US-backed warriors of Tibet protected from Chinese occupation in the 1950's. Mustang, officially part of Nepal, juts into China; on a map one can clearly see the shape that is called “a thumb in the eye of the Chinese,” by many. China's brutality in Tibet has brought support for this culture to a new high, in part inspiring this exhibit. Independent Mustang was closed to the West until 1991, quietly following centuries of tradition unmolested by occupying forces, technology or modern commercialism. The Dalai Lama has praised the practice of Tibetan Buddhism there as the “best in the world.” 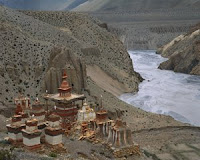 Not only that, but Padmasambhava, the founder of Tibetan Buddhism, my personal inspiration for so much and whose presence I called upon as I began this blog, built the first Buddhist temple in Mustang.

Tashidelek (Tah-shee-delay, Peace) Ken. I'm sure the monks enjoyed their day at Esalen, celebrating the energy of another indigenous tribe, and soaking in the healing waters enjoyed by weary travelers for a millennia. Here, from the Tibetan Book of Living and Dying is the Padmasambhava mantra, ideal for "peace, healing, transformation and protection in this violent, chaotic age" :
OM AH HUM VAJRA GUR PADMA SIDDHI HUM.
Photos of Lama Sonam Tsering and Ken Parker by Toby Rowland-Jones