Survision does the Big Easy 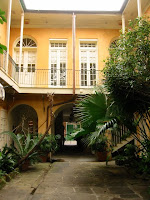 On this wet and stormy Big Sur Sunday, with hail and branches whipping down onto the muddy dirt road to my home, it’s hard to believe that just two weeks ago I was in the French Quarter, ground zero of the sleepy, muggy center of the Southern Gothic: New Orleans.
My destination includes a special treat: when I walk into the elegant courtyard of Soniat House I find a picture of a famous writer’s craggy face, fresh cigarette dangling from his fingers. The 24th Annual Tennessee Williams Literary Festival begins tomorrow!

The land of voodoo, alligators, Mardi Gras beads, jazz and gumbo is offering up to us a bit of southern culture: a five day conference celebrating the work and the life of this giant of American literature, who lived in New Orleans off and on from 1939 onwards.

After a hilarious mad dash to the airport (parking by the hour for six days so as to not miss the flight, my companion phoning me from her seat as I dropped my shoes into a bin, almost losing my ticket to a standby traveler) we took off to Dallas.

My friend loves the world, especially its sacred places, and considers New Orleans a home of her heart. We were late to the airport that morning due to our pouring over family pictures, after a night of champagne and scotch (to give our trip the proper start, of course).

The beauties of the world are in her home too: a harlequin mask beside the candelabra, palm sized multicolored glass fishes swimming on the windowsill. The walls are covered in tribal art, feathers, butterflies and scarab beetles. Religious figurines, rare stones and ritual objects of all kinds fill the shelves. It’s Spring, and all of her brilliant orchids are blooming.

My virgin trip to the Big Easy! If only I didn’t feel so un-easy about flying. We meditate on board and put golden light around all the shiny, important parts of the airplane’s engines, flight instruments, and of course the pilot and co-pilot’s minds.

That evening, I walk down Bourbon Street and make a quantum shift. After a lifetime fear of flying objects (the fate of a four-eyed girl who preferred the library to team sports) I reach out into the air and grab a silver necklace of Mardi Gras beads, falling from a balcony into my open hand. Naturally, I wear it to the opening night reception of Tennessee’s festival, which consists of a cocktail competition and a screening of A Streetcar Named Desire. (I also wore my wife-beater white undershirt in honor of Stanley.)

Three powerful cocktails vied for the award, prepared by local mixologists and titled “Big Daddy’s Stella” (a ghastly mixture of bourbon and fruit something or other) followed by “Pink Honey” in lovely pepto-bismol pink (flavored with half & half and some mysterious horrid liqueur) and finally a tequila number called “19th Hole.” 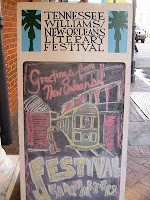 Naturally the evening became a blur, and I think the winning drink was “Pink Honey” nicknamed “Shirley Temple’s Underwear” by someone in the crowd. For the duration of the Festival you could go to the Chateau Bourbon hotel and shout “Stella-a-a” just like Stanley and imbibe two Pink Honeys for the price of one. I’m so there.

The following morning we went to a scholarly discussion on Williams’ coming out on the David Frost show in 1970. Frost quizzed him about writing from both male and female perspectives, and Williams replied that we all have both sexes inside us.

Frost pressed this point and Williams replied (he was not particularly sober during this interview, said one scholar dryly) that, “Let’s just say I’ve worked the waterfront.” While out already to those in his world, that statement apparently made the rest of America go A-hah! More evidence that words can and do change the world.

A long discussion of Queer Theory, the Stonewall riots, etc. followed. One surprising idea to me was the concept that Blanche (from Streetcar) was metaphorically speaking, a drag-queen. Not so, say the experts. This idea irritated Williams, who depicted the many variations of both genders with such subtle grace. I found myself thinking of Georgia O’Keefe’s reactions to the hints (people only dared to hint this to her) that her enormous flowers were really womanly sexual parts. Georgia didn’t think so, and she should know! Art and how we interpret it, endlessly entrancing subject matter. 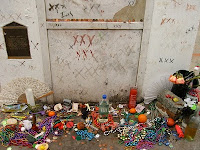 After a carriage ride to the St. Louis I Cemetery, we lit candles at the tomb of the “Voodoo Queen” Marie Laveau. We made some X’s for wishes in red lipstick on her marble crypt. Then we separated and got lost in this city of the dead, calling each other on our cell phones to find each other again. Cell phones in a 19th century cemetery, truly a 21st century moment. What would Dennis Hopper say?

As I struck a dancer’s pose before Marie Laveau’s tomb, opening my arms up into the sunlight, my mind flashed on the potent waterfall currently flowing through Castro Canyon in Big Sur, traveling from the redwood forest to the sea. This image was so vivid that for a few seconds, time stopped. I think my wish will come true…

Flying out of town at sunset: city lights sparkling, full moon with a single strand of pearly cirrus clouds below her, surrounding bayous and Mississippi River below, the gulf stretched out forever. We nicknamed this adventure our Mojo Restoration Trip (MRT) and the mysterious feelings from this journey still flow quietly inside us. 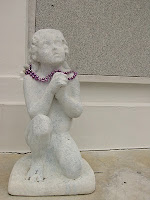 Playful and poignant, like Mardi Gras beads on a cemetery angel, this great American city offers time travel to the distant planets of the imagination. It is a place of both earthly pleasure and spiritual power. Yes, I’ll be back!

Quote of the week:
“When you die, if you want to go to Heaven,
you have to walk down Bourbon Street first.”
This from NOPD (love that acronym) cop.

What I remember most: 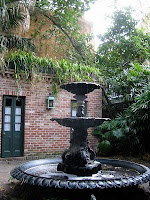 Posted by Linda Sonrisa at 5:15 PM No comments: