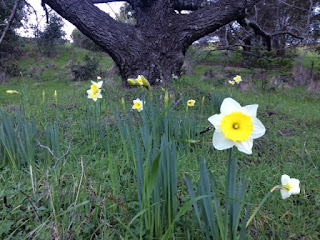 Nothing in the world
is as soft and yielding as water.
Yet for dissolving the hard and inflexible,
nothing can surpass it.

The propane tank is at 25%, tribes of earthworms are emerging everywhere, and the cat had a seizure. I've stopped bothering to check the rain gauge. While we still have plenty of coffee, rice and beans, I’m afraid that we may run out of that vital supplement: chocolate.

It’s been a rough month on top of a crazy year. Sixty inches (that's my height) of precipitation in two short months. In early January I made a trip  to my mother’s house and on my drive home a mud / rock / tree slide happened in the Big Sur Valley, closing down that stretch of highway for days. I spent a week with dear friends in Carmel and longed for home despite ongoing punishing storms.

I was willing to climb with a backpack over the rock slide at the bottom of the ridge to hide under the covers with my beloved, but decided to be prudent instead.

A month later I was about to head north again, and wisely re-thought the  trip after looking at the forecast. I also caught a nasty cold that kept me in bed on Sunday, February 12. That day the Pfeiffer Canyon bridge was designated as a serious hazard, thanks to the lucky observations of the man who spent considerable time under the span.

So these past two weeks I have reveled in being here on the ridge and not on the “other side” despite hardships and anxiety. One morning we awoke to snow on the mountains and a bright rainbow over the ocean. We’ve enjoyed candlelight dinners and then gone early to bed, to sleep like little animals in a burrow. Again and again we listened in the darkness to pounding rain and howling winds, wondering what the morning would bring.

It’s felt like we were living at the bottom of an aquarium. Enormous trees tossed their branches like kelp fronds and even the air burbled and hissed with endless wetness. Meanwhile, the frogs were delirious, croaking epic operas all night long.

Last night we dined on sardines with wasabi sauce, served with a flair as “poor man’s sushi”. We’ve found the time to read, do yoga in the intermittent sunshine, to breathe and to think. I’ve finally opened Joseph Campbell’s Hero with a Thousand Faces, and am finding inspiration in every well-crafted phrase.

We’re looking at several months to a year of difficult crossings out of Big Sur to the North. The exit South is un-traversable until a nail-soil wall is in place, the Old Coast Road is a river, and Nacimiento-Ferguson road over the Santa Lucia Mountains is crumbling.

It’s as if Momma Big Sur stomped her foot, took down her hair and did a full-body shimmy for weeks, saying “Enough is enough!” She has reclaimed her craving for chaos, her destructive power.

Perhaps she got tired of staying in shape for the whole wide world, constantly at her door, and decided instead to give us a taste of her sloppy, scary, gorgeous self. Now, as the storm cycle subdues, we feel her calm out-breath, and it’s delicious.

While repairs are forthcoming and the powers that be are strategizing, those of us on the ground here are also discreetly celebrating the solitude, the reduction in distractions, and the re-awakening of all the nature around us. When the rains stop, the birds sing.

Systems are falling into place, too. My poor gray kitty had a bizarre seizure. This taught me that trying to subdue an animal that is frothing at the mouth with my bare hands is not a good idea. After sustaining kitty stigmata in my right palm, I called our community’s Big Sur Health Center.

To my astonished delight the center's resourceful doctor put antibiotics on a helicopter headed down the coast that afternoon. I picked it from the pilot, who smiled at me and waved the brown paper bag holding the drugs when he landed on the heli-pad. It was a movie-worthy moment. (Note to self, next job – helicopter pilot?)

Due in part to the lack of affordable housing in the area, many of those who do important work in the kitchens of the affected businesses live outside of Big Sur. Instead of the grand tradition of restaurants opening their walk-ins to feed hungry, trapped employees and locals, they are simply closing down. On Valentine’s Day, we had one of the last ambrosia burgers Nepenthe will be serving for a while.

Anticipating this, many of us blessed enough to live between mile marker 29 and 45.5 have stocked our pantries in preparation for this kind of event. A bit of a doomsday perspective has helped, as do vegetable gardens, of course.

We slid under the wire on this one, as we acquired 20 cubic feet of dirt a week ago, filling our little truck. Just before we crossed Pfeiffer Canyon bridge, already beginning to look like a roller-coaster, we were informed that there would be no more traffic on it of any kind, ever. We felt like trapeze artists as we drove delicately across the middle of the sinking span in a lane marked by orange cones.

Driving down the rocky coast in the sunshine that day, we saw a painter friend at her easel on the wrong side of the stone wall, 500’ above a cove filled with barking sea lions. While some have hiked and ridden horses on the highway these past weeks, our friend informed us that earlier that day a young woman had sailed past her on a skateboard, completely naked. Brrrrr!

Today is blessed sunshine; the lights go on when you flip the switches, the washer and dryer are doing their holy work. Outside I pull up large swaths of tenacious scotch broom, freeing invasive roots from rocky soil that has become soft clay, almost butter.

Some time ago we bought several cans of “Liberty Seeds” from survivalseeds4patriots.com. We have beets, cucumbers, corn, lettuce, kale, spinach, carrots, onions, peppers, and more - all in super-compact, not-yet-germinated, form.

As soon as the rain stops for a few days and it gets a little warmer, we’re going to put dirt into two large circular canvas pots and sow these mysterious seeds. It’s a miracle that something so tiny will create a plant that we can eat in the months to come, and we are hopeful.

We're on a kind of frontier now, where communication, patience and self-reliance are all crucial. Simple seeds can provide freedom in the midst of chaos. We're looking forward to a sumptuous Victory garden, more appropriate now than ever. 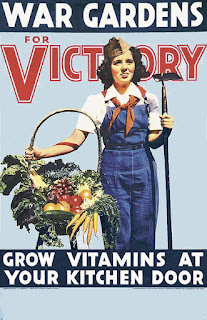 Posted by Linda Sonrisa at 4:15 PM No comments: