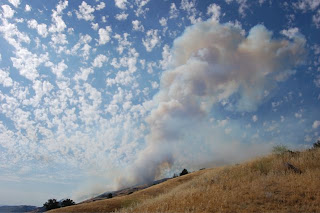 This morning The Shire is calm. Fog rolls in from the ocean below while the sun comes up over the ridge-top. Birds sing their morning chorus, and green lawns stretch to the horizon.

Last night, the shortest of the year, I stepped outside my bedroom to the gentlest of sounds: wind chimes tinkling, critters whispering, earth humming. Stars sparkled, and the moon spread her light on the sea, shining on my doorstep, on me.
Peace and tranquility beyond my dreams, a glimpse of heaven, really. If only I could merge with the earth, the breeze, the dark sky, to be one with Spirit for longer than a breath.

It's hard to believe that two years ago yesterday, on June 21, 2008, one of Big Sur's biggest traumas began. A gigantic wildfire, eventually consuming a quarter of a million acres, sparked from a lightning strike within sight of my home (see above.)

A beautiful summer afternoon, bizarre barometric pressure and human fallibility conspired to create a scenario that for the next two weeks scared many of us out of our wits, and / or stressed us beyond our imaginations, providing the adrenalin high of a lifetime.

There is something profound about a community united in purpose, and on Partington Ridge we felt it in spades. Renamed Renegade Ridge, here a small band of determined people made a stand to protect all of our homes.

On this anniversary, we honor them: Toby Rowland-Jones, Christian Nimmo, Martin Hubback, Kevin Southall, Kate Healey, Sula Nichols, Kevin and Lyle Southall, T.S., Dave Smiley, and the Dubois brothers. We thank our neighbors who joined in, from north and south: Aengus Wagner, John Knight, Tevya and Branham Morgenrath, Krystal and Tom Gries, and other brave souls. This group was joined later by hot-shot crews from multiple states, and the USFS.

This gracious ridge, with rolling hills sloping down from 3200' to the sea (with a handful of homes from 1900' to 700' ) is known to many of us as The Shire. Like Tolkien's Middle Earth, here we live in (relative!) peace with the land.

As if to confirm this we have a high number of residents originally from Jolly Olde England. It is possible on this mountain to hear some plummy British accents, drink Earl Grey tea, and be affectionately called "ducky". My theory is that the love of the land, while it runs deep in all of us, is perhaps especially strong for those who come from that chilly little island.

Today I contemplate the peace, while remembering the war. The sky thick with smoke, the hissing and crackling of the fire, the terrifying bright orange flames so bloody near. Unable to take a breath during those weeks, today I relish the deep cool air of The Shire. As summer begins, and another fire season looms, it is good to know that nightmares end, and that peace always prevails. 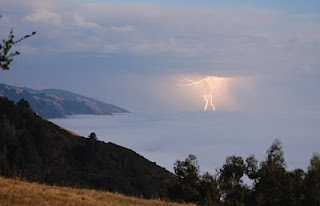 Photos by Toby Rowland-Jones
Posted by Linda Sonrisa at 6:59 AM 2 comments:

Ever so often here in Big Sur something happens that reminds me with perfect clarity of who I was as a young girl. When I opened my front door yesterday morning I saw an amber colored horse standing on the edge of the meadow. He was nibbling grass, his golden coat reflecting the sunshine just emerging from above the ridge-top. Naturally I grabbed some carrots and my camera and paid him a visit.

The horse is both a prosaic and romantic creature: when they've come down in the past to feed on the sweet grass in the meadow, they came right up to the front door asking for apples. Later, though, in the hot summer weather, we realized they brought flies and um, other gifts, that made their presence less desirable.

I was one of those little girls that loved horses, passionately. My childhood was filled with books that took me to places where I raced the wind across Arabian deserts, trotted through the streets of London and galloped down blustery beaches to the sea. All of this was a great escape from suburban streets and shopping malls.

The usual jokes about horsy girls aside, a wise woman revealed to me recently that a girlhood love of horses is an archetypal response to the lack of an emotionally available father. Sigh. That was probably true, though now I'm happy that Dad is just a person who needs love and understanding, like us all.

But back to the horses! I had a collection of figurines (raise your hand if you did too, you know who you are) and arranged them differently depending on the stories they were playing out on my shelves. (I do remember Dad building me a special cabinet just for my horse family.) They were much more interesting than Barbie dolls to me, with fiery or gentle characters, brilliant coats and sparkly saddles. They had dreams of living life roaming the wild western mountains, or kicking up their pretty heels in the circus.

Rather than wanting a horse (which I eventually acquired after years of riding lessons, in the brief window before the end of childhood and the beginning of adolescence) I think I wanted to be one: big, graceful, slightly dangerous, and full of ancient mystery.

Later yesterday, as I drove to work, my equine friend, who had wandered down the path towards the gate, came trotting back towards my truck, startled by a car. He pranced past me into the meadow, head and tail up, backlit by the morning sun. 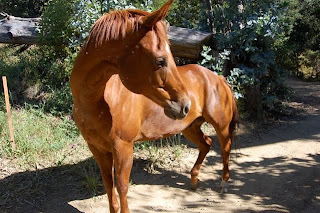 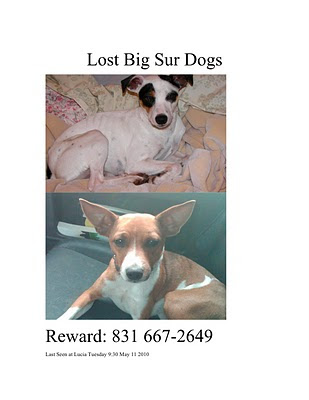 two impossibly happy Partington Ridge Rat Terriers, left town early last month, picked up by tourists driving a Land Rover south on the highway. Like Jerry (of Tom and Jerry's Mouse in Manhattan), they most likely didn't plan on an adventure that would take them who knows where.

Despite the fact that the dog-nappers were aware that these wee beasties were lost (they asked a State Park Ranger about them) they ignored the Laws of Karma and did not deliver them to an animal shelter.

This we know because the family who is desperately missing Peep and Poodle has searched these places, including going all the way down to the shelters of Los Angeles to bring them home.

These are not dogs who would enjoy being in a starlet's purse! And while I can imagine them eating caviar in Beverly Hills, I'm sure they miss the wild smells of Big Sur, riding shotgun with their Mom up and down the ridge, and curling up together beside the fire.

A couple of days ago I stopped into the Heart Beat Gallery here, and met a lovely lady who showed me a colorful deck of cards. I chose one titled "Calling the Spirit Home". This reminds me that no one in the world greets me as my dog does, all smiles, wanting a hug and whimpering his pleasure at my return. When I'm with my funny-faced dog, who guards me and loves me, I'm home. A quiet cat or a beloved bird can do the same thing: these creatures bring us home to ourselves.

Breaking news: Peep and Poodle were found by a friendly animal rescue worker who saw the family's flyer, and identified them at a feed store in Morro Bay. They're now back home where they belong!
Posted by Linda Sonrisa at 9:24 AM 1 comment: