"The Clip is on the Altar" 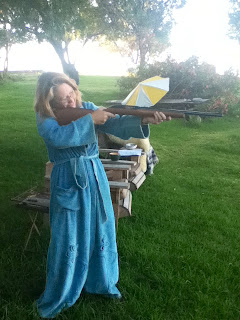 There are a few spots in the world where you will hear this phrase. In places where religion and violence have sadly merged, spawning civil wars, and in hippie-hillbilly enclaves like my town.

Last summer, a rattlesnake curled up behind a statue of Hathor on my altar. This year, the clip for our .22 rifle rests next to a dancing Ganesh.

Coyotes have their way in Big Sur, with tolerant humans who mostly have domestic animals, not livestock, and who have definitively moved out their larger predators. Mountain Lions and Bobcats are as rare as Unicorns, where these prairie wolves are everywhere, some monstrously large, all fearless.

Firearms can be fascinating to the gentlest of souls, and it's not just the movies that give them a certain frisson. Many of us harbor secret (or not so secret) fantasies of undisputed power over something or someone. And a rifle in the country is an acceptable tool. We actually have a use for it, should our rural infrastructure collapse. Coyote for dinner tonight, folks? Tastier than squirrel, more substantial than quail...

Still, it was not without delighted amusement that my friend Laura snapped this photo of me one morning this past week. "Is that a coyote?" she asked and began to coo at it while I hot-footed it back indoors to find the rifle, and the clip (on the altar.) She's mostly a city girl, so she almost dropped her coffee cup as I loaded, aimed and fired. Craaaack. And the enormous coyote (he looks enormous 100  yards away so I know he's big, and a real threat to my old, deaf dog) took off, well, like a shot.

I hadn't realized just how satisfying that would feel. This morning, as Kip barked at another of these jackals creeping up the side of the canyon, I fired again, and had the satisfaction of seeing the cheeky guy jump and scramble for cover in the brush. Oh dear. Big game hunting may be next.

Though really, I don't want to actually kill anything, that would be awful. And of course, changing their essential naughty coyote behavior is not in the cards. But I do want them to pay attention and respect my firepower, thank you very much. "Hey you big bad boy, the game is up! Mama has a gun and she means business!" 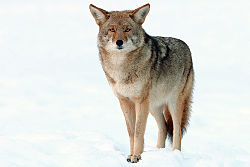 Posted by Linda Sonrisa at 8:38 AM No comments: