For years now, I've had a secret friend, who lives in the cabinet in my office, sitting on top of a bin of paper clips. He's rotund, shiny, black and plastic. When I'm agitated or curious, I turn him over and see what he has to say.

My least favorite answers are "Concentrate and Ask Again" and "My Reply is No." Much, much better is "You May Rely on It" and "YES" in resounding capital letters. If I've asked the same question over and over and over, essentially demanding a positive response, the YES feels as if he's saying, "Enough already!"

Like throwing chicken bones or casting lots, reading my friend's bright white words on a ghostly blue cube connects me, in some strange way, with the un-manifested, with what is yet to be. While Rilke has said that it's more important to live the questions than to have the answers, my plastic, fantastic, magical friend comforts me. Especially since I practice patience (or is it obsession?) in searching for my answers.

A teacher once told me that our needing to know is a kind of addiction, a part of human nature that seems emphatically expressed in Western culture. When we don't know, when we take those leaps of faith, we can plunge ourselves into considerable discomfort. It would be so nice to be certain that we are "right," that the outcome of our actions will be good, enhance our lives, make us better people.

I've known precious few individuals who have that elusive, rock-solid certainty about what they're doing in Life. Those who go directly from point A to point B, in their personal and professional lives, who laugh at horoscopes, and would never dream of having an emotional response to a fortune-telling toy. I wish I was like them and I detest them, simultaneously!

There is a freedom to be found in laughter. My friend's gift to me is that I feel lighter in the goofy process of consulting him. Originally marketed in 1946 as the "Syco-Seer" he's about as silly as a fortune cookie and only slightly more complex than tossing a coin. But his predictions can be profoundly satisfying. At turning points in my life, I generally ask the Universe, again and again and again, in a variety of ways. Then, when I (finally!) act, at least I feel like I've covered my bases.

But then, my most favorite answer is Ilsa's in Casablanca, in 1940's Paris: "There's only one answer to all our questions," she coos in her satin dressing gown, as she plants a big wet one on Rick, and they melt into each other's arms. 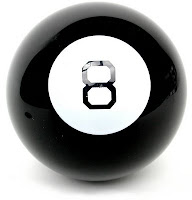 Mattel's Magic 8 Ball: Does it hold the Answers? 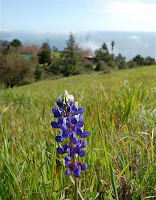 Today is the first day of Spring, and here in the Sur it is lovelier than ever. We've had our gentle and only slightly scary Spring rains (200,000+ acres of back country did not flood the valley or close the road) and even the mysterious Chantrelles made a comeback appearance, peeking out through the ash and leaves beneath the oak trees.
Now comes the time of the Lupine and the Poppies. Walking through a field of lupine flowers is divine: imagine Grandma canning grape jelly on a springtime afternoon in her farmhouse, a warm breeze wafting through the screen door, carrying the scent of grapes cooking in sugar. Like the peasants in Monty Python's Dennis Moore skit, we too could possibly enjoy a lupine sorbet. Something that smells so delicious seems like it would also taste good.

Smelling the warm earth and the sweetness of the small, ankle-level purple blooms smeared across the mountain, you feel Life coming up out of the Earth here like no where else I know.

We're now preparing for our annual Pagan Spring Festival, aka Easter. Several years ago I re-read Oscar Wilde's The Selfish Giant and became determined to share where we live with children. (Finding pretty eggs and chocolate bunnies in the green grass of Partington Ridge is an experience no child should miss.) Wilde tells us that Spring cannot really arrive without laughter and love filling our hearts. The metaphor for renewal and redemption is almost too much for me!

This year, the California poppies splash like gold dust (or saffron, as a friend says) across hilltop meadows, contrasting with soft purple carpets of lupines. Nature is the best designer, fiery golds and cool blues complementing each other against the mountains' bright green canvas. Everyone is talking about one special spot where the poppies really, well, POP.

As a young person, I remember learning that our state is the "golden state" which only makes sense, as anyone born in California will tell you. In Camp Fire Girls we learned that one should never, ever pluck the state flower. Here's a little poem from those days which I often think of at this time of year:

I will be the happiest person under the sun.
I will see a thousand flowers and not pick one! 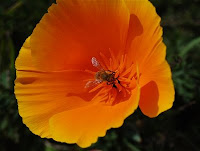 It's funny how ten years ago can seem a different lifetime. What happens to us each decade? What skin do we shed, how do we re-grow ourselves, and into what? We are unfolding mysteries, always.

From 1998-2001 we raised goats on Partington Ridge. A funny story from the beginning, when our back-to-the-earth friend showed up one afternoon with about a dozen goats crammed into the back of his pickup, under the camper shell. Three Mamas and lots of babies.

When this same friend taught me how to milk the nanny goats, I felt I was crossing back into another time, another world. Yes, I’m going to firmly grasp this animal’s teats and pull down hard, squeezing out streams of warm animal-smelling milk. It was delicious.

My hands got really strong, as an old friend commented when we held hands several months after I became a milkmaid. Milking the goats made me feel connected to people around the world who live close to nature, and gave me a wonderful sense of calm each morning. I was even able to feed my puppy directly from the source, shooting a stream of milk into his open mouth.

We made goat cheese too, cooking it slowly over our stove or leaving it to turn in large jars set in the sun. We’d flavor it with herbs and sell it to the fancy-pants restaurants in the valley. People loved it!

But milking the goats entailed breeding the goats, since milk production is ostensibly for goat kids, not humans. The babies came and then the milk came. So, we'd invite the billy goat over, avert our eyes, and a few months later watch (if we caught them at the right moment) the nanny goats give birth. They delivered their kids calmly, lying down in the straw and bleating occasionally, with a resounding bleat at the moment of truth.

Once I left two nannies with an enormous billy, big as a large pony, for a few weeks. As I was leaving the paddock, both of them ran towards the fence after me, bleating in distress, as if they were saying “doooooon’t leeeeeeeeave us here with this beeeeeeeeast!” But we did, and they both came home pregnant, producing a bumper crop of kids.

Mostly, I miss the babies, spindly legged little damp guys with horizontal pupils. We’d help the fresh arrivals to stand up and nurse, made sure everyone was comfortable and well fed, and would depart the manger, leaving the nanny madonna to rest with her new family. The hard part was selling the billy (boy) babies for stew meat several months later.

There was a reason for this sale, other than the purely mercenary one: billy goats mature sexually really fast, in less than 6 months or so, and, well, they’re randy little buggers that will mate with their own mothers, aunts and sisters. Not to sit in judgement of course, they were simply full of themselves and their sexual mojo, in some very amusing ways.

I remember when Captain Fuzzy (yes, we named all of them) began to grow into his adult billy goat-hood: As I was milking his mom, Felicia, I looked over to see him in a wide stance, head dropped between his forelegs, peeing on his tummy and face. And relishing it. He lifted his little head and wrinkled his nose, taking a deep, blissful whiff. Ahhhh. Yeah! A grown up billy, as you might imagine, stinks to high heaven. The urine is their pheremonal cologne, and like a slightly oily Casanova, they love the way they smell.

But still, I was always unable to eat cooked goat even though my husband encouraged me to think of it as if I was munching on a carrot from our garden. It just didn’t’ work; I couldn’t enjoy eating Captain Fuzzy, or Bebop, or Sigh Happy, or any of our capricious friends. They weren’t particularly disciplined at clearing our thistles either, though I do have a sweet memory of chasing them out of our elderly neighbor’s garden, with his help.

So, our lives changed again. As we became more occupied with the world beyond the property, we dispersed our tribe of goats to local chefs and neighbors. The era of the goaties comes back to me each Spring, though, when I imagine them nibbling on all the lovely new green growth, and I wake up to cold mornings dreaming of fresh warm milk, and the peace that only a happy goat can provide. 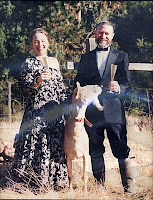 Cappuccino, Curious and Bebop
Me and Sigh Happy
Green Acres Christmas, 1998 (photo by Jeff Prather)
Posted by Linda Sonrisa at 9:43 AM 1 comment: