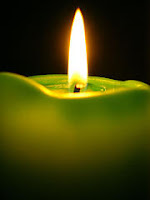 Imagine a rainy December night in Big Sur, guests driving down muddy roads through forest and cattle paddocks to enter a large, cathedral-like structure in a spacious meadow.

Glowing candlelight and the smell of hot spiced tea beckons us as we remove shoes and coats in the foyer. Amidst the paintings, Native American rugs and sheepskin draped furniture, we chat with our neighbors. Laughter, hugs and ginger snaps fill the half hour or so before we begin an ancient and uplifting Winter Solstice ritual.

Pagan ceremony gave meaning to our ancestors, by connecting them with the seasons of the Earth and of their lives. European winters, with hardships of cold, famine, and darkness, would bring reverent pre-christian folks together for practical reasons: to share food and light, and to warm their hearts and bodies through celebration.

We hold hands in a long line and walk upstairs to the second story. In complete darkness we slowly form an oval shape around the center of the room. Our leader, a lovely sprite of a woman, quietly lights a square votive candle sitting on a redwood round. Then we see the wonder: branches of redwood, bay and cypress, circling out from the candle in the center to our feet. The beginning of our Spiral of Light.

With the one candle lit, our guide returns to the entrance to the green labryinth and begins to sing in the darkness. This is the first of several rounds we will sing together as we walk the spiral this evening, from Latin hymns to bits of American folk ballads. As our song fills the high-ceilinged room, individuals, couples, and parents with their children, receive candles and follow the path to the center of the spiral, lighting their flames from the central one.

Each celebrant then places their small, lit taper, mounted on a round slice of tree, amongst the greenery of the spiral. Everyone's procession to the light is different: young people walk fast, goal-oriented, while older folks stroll more thoughtfully. Some, like myself, prance a bit on the walkway. Some light their candles simultaneously with their spouse or child, others solemnly light their flame separately.

When we've all had a turn, the effect is kind of like an enormous Christmas tree, laid out on the floor, sparkling with each individual's light. Light will return to us on this darkest night of the year. We will move forward into clarity and joy.

Our guide had said the Light Spiral ritual is transformative. I recognized that truth as my throat caught, holding my husband's hand approaching the circle. As I walked out of the spiral through the candle-lit forest on the floor, I felt the release of weight, a momentary spiritual lightness and ease. This feeling was echoed in the smiles on the faces of my neighbors, and the way we gently brushed each other's hands as we returned to our seats.

On Summer Solstice of this year, we dealt with fire in a very different way, slashing down trees and brush to stem its flow over the mountains and to our homes. This Winter Solstice evening of gently lighting candles, of singing as a community, was a way to experience fire differently: As a force of nature honored by our ancestors, and as a symbolic guide for us and for our children.


My favorite song of the evening:

Though my soul may rest in darkness
it will rise in perfect light.
I have loved the stars too fondly
to be be fearful of the night.

Happy Winter Solstice to All!
Posted by Linda Sonrisa at 7:31 AM 5 comments:

For me, the holidays are the time to take to the couch, cuddle up with a soft blanket, plug into the old movie channel and cry. What a year we've had, and how ready I am for it to be over, already. Going back to the 1940's, with its cinematic themes of sacrifice, disassociation, and pluck, is somehow comforting.
In the last month of our beloved nonagenarian neighbor Bob Nash's life he told me he'd heard the song, The Bells of St. Mary's, in his head, all night long one sad evening when he was ill.

Tonight this wonderful time-travel piece played on our satellite. Those rich dulcet tones of Bing Crosby's voice evoke his era (and the season) to perfection. When he and Ingrid Bergman sang the theme song with the sisters, I sobbed and thought of Bob, and his last days on the planet. I miss him. He was my ballast, a part of my heart. I know it was "his time," but so what? It is a loss I honor, every day.

Seeing the dewy skinned and trembly voiced Ingrid in a nun's habit mystified me. Bing, with his Roman collar and boater hat, worked behind the scenes to make the nuns' dreams come true: the local tycoon (Henry Travers, Clarence Odbody to fans of It's a Wonderful Life) donated his building for their school. When the rich man finally gives in, a mongrel terrier he's befriended yelps and yawns in the pew just behind him. (I think the dog inspires his benevolence more than the church and the beautiful nun, but that's just my take on it.)

Yes, just transport me to the mid-1940's, when life was so much clearer. This time of year, the weepy hormone, Estrogen, gives both sexes permission to shed some tears remembering our dreams of holidays past. Call it a massive, culture-wide, anniversary reaction to our dysfunctional world.

So what can we say as we approach the end of this annus horribilis? Well, we learned a lot, our souls pressed to the windshield of the speeding car headed into the bottomless lake. Our hearts grew, as we realized we were surviving, not crumbling. The only way to do this in difficult times is to expand, not contract. And that means pushing our hearts to the breaking point, filling them like grand balloons, almost to bursting, but not quite.

The best part of the December holidays? January and the New Year is right around the corner, beckoning to us like the sweet nymph she is. And this year, on January 20, church bells around the world will ring out a new and beautiful song.
Posted by Linda Sonrisa at 7:18 PM 1 comment:

My laptop hard drive died a glorious death last week. I found it, sitting on top of my bed in the afternoon sunlight, making furious popping sounds. Repeated attempts to shut down and restart were met with the dreaded flashing question mark. Worse, the computer's bones then burned up before my eyes like special effects in a movie, lines and lines of code splashing across the screen. As the words Complete System Failure sank into my brain I began to wail.
I have this awful habit of copying documents into different folders v. backing up the hard drive itself. DUH. So, a year's worth of writing, lots of drivel, and some bits I was happy with, GONE. I feel like I've had one of my organs removed, a kidney let's say, and am functioning at half mast. How surprising to learn that my words have become such a big part of my identity. Thankfully, I'd sent out a lot of "test balloons" (drafts of short stories) to friends, and so all was not lost.

Now I am chasing down my Muse, calling to her as she speeds over the hills into the back country of my mind. Wait, wait! I need to experience that grief, just one more time, to get the nuance of that bit of personal history I am trying to craft into Art. Show me your face, again, my Beauty, show me your tortured smile. I know there are jewels in your tears. The tears that heal romantic fools...and bring them back to the land of the living.

Anaïs Nin said, "We write to taste life twice," and there are some things I'd rather not taste again, thank you. But with my laptop I can. Composting life's pain into art is a joy and a practice. We must, as Pema Chödrön says, "Turn arrows into flowers by opening our hearts."
Photos by Toby Rowland-Jones
Posted by Linda Sonrisa at 6:06 AM 4 comments:

Painting from the Inside

Painter, scholar and healer, Karuna Licht's life follows these three parallel paths. Her story reflects a special time in the world, and in our community. Big Sur is her muse, and her work is unlike that of any other local artist.

As a young girl Karuna lived next to the Brooklyn Museum in New York City. At 7 years old, she saw a woman working in the pottery studio there, and knew she would be an artist. She began as a potter, and her father encouraged her to paint in watercolor as well. The German Abstract Expressionist Emil Nolde, who created miniature watercolors which he called his Unpainted Pictures during the 1940's, was also an early influence. She looked at his work and knew she could push the boundaries of her medium. Her paintings show a Japanese influence too, in their precision and Zen-like quality. 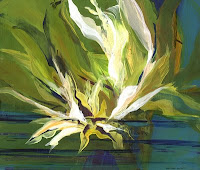 Karuna was a Fine Arts major at Hunter College, and came to California in 1965. She began working in her own studio in the Carmel Highlands, creating watercolors and abstract pottery. As a potter, Karuna explains, she "learned to meditate—how to be still, centered and focused." "Watercolors," she adds, "are for decisive people. You work fast. And with kids, it was easy to clean up afterwards."

At this time, she discovered Big Sur (like so many of us) via Nepenthe. Also, she read the Henry Miller (who also came from Brooklyn) work Oranges of Hieronymus Bosch, and decided to build her life here. 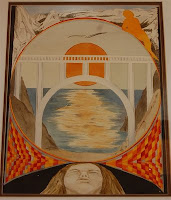 Karuna practiced holotropic breathwork with Stanislav Grof at the Esalen Institute, an experience which led to deeper spiritual explorations. She, along with many of the movers and shakers at Esalen at the time, visited Baghwan Shree Rajneesh at his ranch in Oregon. To Karuna, one of his most appealing ideas was that the world will change only when women are in leadership roles, liberated both sexually and intellectually. (I'd like to think that's now coming true.)

She began doing Simkin Gestalt therapy and led Gestalt groups for women in Monterey County. At this time, she relates, women were just beginning to put into words their own psychology, asking the radical question: what if I put my own identity in the center of my reality and started looking at my life? At UCSC she entered the field of feminist studies. For the past three decades she has worked as a psychotherapist, having earned a Masters degree in the psychology of women, via an extension program of Antioch College. 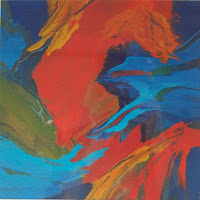 Karuna's life and art have undergone a massive transformation in the past 5 years. She considered leaving Big Sur, but remembered what Ram Dass said about "only moving the furniture around, yet not changing the core. " Instead, she renewed her studies of painting, with Mendocino Abstract Expressionist painter Judith Hale, who encouraged her to paint in acrylic, which she now does exclusively. Her work can be seen today at the Del Campo Gallery in Big Sur and at the Valley Girls Gallery in Carmel Valley.

"I don't want to be only a landscape painter," Karuna says, "I want to paint what's inside me." Judith Hale suggested she paint with a 4 inch brush, the same instructions she'd received at Hunter College so long ago. "I gave myself 2 years to learn this medium, 3 years to have a show and 5 years to make it! And I did."

Posted by Linda Sonrisa at 7:02 AM No comments: