No, not the 1957 Ingmar Bergman film, but the tiniest little gems of fruit in my garden.
They hide, they're itty-bitty, and they're only tasty when they are completely scarlet verging on burgundy. They peak when they're so ripe that they're almost ready to drop off the stem, and yes, there's a metaphor there. Served with slightly melted vanilla ice cream and fresh mint leaves, they're unforgettably delicious.
Typically we harvest only a handful a season, but now there is a bumper crop, around the pond, on the path to the meditation deck, and underneath the palm tree. Finding them recalls our annual Easter egg hunt. Since we hide brightly painted champagne glasses so our grown-up guests can also enjoy the thrill of the chase, sometimes we find a lone, faded goblet in the grass.
You can pick a bunch of berries and marvel at their beauty, but curiously, they don't taste better en masse, and there's an allegory for you! Less is more in the wild strawberries department. One, whether plump or microscopic, is enough. What counts is the explosion of the sun-warmed, juicy essence on your tongue. Succulent, sweet, surprising. Take a moment and savor just one, and you know that the gods live in nature, and their gifts can make us whole.

This past Saturday afternoon I found myself at Big Sur's Captain Cooper elementary school, visiting the Children's Garden. A playful horticultural lab that is a real "victory garden", this tranquil yet dynamic space below the classrooms gives students a wonderful outdoor learning experience.

An organic garden this large clearly involves lots of ongoing care, and while Lauren has the vision, it is the schoolchildren who do much of the work in this living classroom, planting, identifying native plants and garden critters, enlisting the help of worms via vermi-culture, etc., as well as learning about what makes a healthy diet.

There's a green house, planting sheds and an art project area, all of it of course with the backdrop of the Big Sur ridges sloping down to the great ocean beyond. You can view a live version of what happens in the garden, in what is quite possibly the cutest slide show on the planet.
Nurturing children's curiosity is noble work, and turning the earth over with one's fingers is a joyous way to learn. Enjoying this beautiful afternoon in the garden, seeing our community in service to children in such a fundamental way, recalls to me the words of beloved scientist and writer, Rachel Carson:

"If I had influence with the good fairy who is supposed to preside over the christening of all children, I would ask that her gift to each child in the world would be a sense of wonder so indestructible that it would last throughout life, as an unfailing antidote against the boredom and disenchantments of later years, the sterile preoccupation with things that are artificial, the alienation from the sources of our strength."

Thanks to Lauren and sponsoring local non-profit, the Big Sur Arts Initiative, that good fairy is clearly working her magic in the Children's Garden! 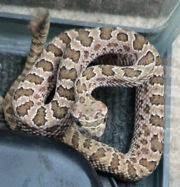 This is by far the hardest post I've written, just for the fear factor! I HATE these buggers, I don't care what they symbolize in the many divination systems I fancy. Transmutation, blah blah blah. These are shy, scary little f*ckers and you don't want them in your garden underfoot.

But just guess what happened today on my delicious morning at home: a tree guy from PG&E walked down the path to my door, and announced, "Wow, that sprinkler sounds just like a rattlesnake." Trouble was, I wasn't running a sprinkler.

Damn, damn, damn, it IS a rattlesnake, I replied, along with many other choice, unprintable expletives. Nothing like a poisonous snake close at hand to release my inner truck-driver mouth. There it was, beside the flower bed, nervously buzzing for all it was worth. Funny thing is, I'd been thinking earlier in the day how it was...almost...time...to see one again. Later, after we disposed of it (yes, we sent it into the next world since it was stuck halfway under the house) Anthony the tree guy remarked that they'd been on his mind today, too.

The babies are born live, not as eggs, and they start hunting immediately. On hot days they take refuge (Oh lord) beneath our house. Gophers are one of their favorite meals, and we've got plenty of those around. They also kill small dogs, cats and presumably toddlers. Each time I see one it is an epic, unforgettable experience, and after a decade here, I've got a few stories to tell.

Somehow, I don't know why, they appear more frequently when I'm here alone. One evening I almost stepped on a baby one, and I hacked it to death with a shovel. My apologies to those of you out there who have a fondness for vipers. You know who you are. As I gouged its head off with the dull blade (OK, I do feel kind of bad about this episode) my sarong fell down around my hips, and I had a vision of myself, a bare-breasted woman battling a tiny snake while simultaneously being devoured (of course) by a gazillion mosquitoes.

Another time I tried the humane approach, and curled one up on the end of a rake, with the idea that I would toss it down the canyon. Snake-on-a-stick, I realized I'm a failure at all sports involving throwing things, and I was certain I'd just flip it back on to myself. Sheer panic, and then I pitched it into an oak tree about 8 feet away.

Crotalus viridus is the species name of the western rattler we find in Big Sur. They don't come out only in the daytime, they don't just hide under rocks. I've seen them at night, stretched out in the cool grass. They can strike out 2/3 of their length, and this formula just gives me math anxiety of the worst kind. I'm not about to test that theory. An absolutely chilling fact I just discovered is that by killing the ones who rattle, we're selecting for the silent ones. Great.

Naturally, the man of the house doesn't like to kill them, and has an elaborate method of catching and transporting them (generally down to the highway near the hiking trails tourists use.) He'll hold the shovel right behind their evil little triangular heads, and then with his bare hands (gloves are two unwieldly) he pinches them firmly where their necks would be (if they had necks, nasty things) and drops them into a bucket or cooler.

One lazy Sunday afternoon I was napping on the lawn on a blanket, arm stretched out to my side. Suddenly I woke up, to see a rattler coiled up about six inches away from my hand. I did the worst possible thing, and just sat up and screamed my head off. That snake was hunting, and as I screamed it rattled, tongue flicking in and out of its mouth.
Suffice to say, with the help of my neighbors and my husband's trusty snake removal technique, I survived, and began to make a serious attempt to appreciate reptile symbolism. This led me to the poem below, from Jamie Sams' Animal Medicine book:

Snake, come crawling,
there's fire in your eyes.
Bite me, excite me, I'll learn to realize
that poison, transmuted
becomes eternal flame.
Open me to heaven, so I can heal again.
Yeah, right.

It's 3am. My body wakens with that strange ache that won't go away. Is it just another reminder of age or something deeper that leaves my heart pounding as I chew over my latest worry? This is the personality I've experienced since childhood: this questioning and wondering about Life.
Tonight (or this morning) I look out the window at the full moon, hiding in the branches of the elm tree. I love the moon so much sometimes I think we should have more than one. Another celestial body close to earth would fulfill the fantasy of many a science fiction fan, as well as provide a reason for even more romantic lunacy. But now I remember that one moon is enough. She has painted the ocean silver with her light, and kept an owl awake, too. It moans quietly nearby as if talking in its sleep.

Big Sur blossoms this time of year. Spring has sprung and we are all ready for warm summer nights filled with music, laughter, play. Art emerges again: twinkling lights, colorful lanterns, and prayer flags festoon our public and private gardens. Models strut down the catwalk in extravagant creations (no fabric allowed), children wear bright folkloric costumes in school pageants, dancers sway to the beat of musicians from all over the world.
In her early summer glory, Big Sur is the Mecca I dreamt of before I immigrated here. Can't it always be like this? This comforting, amniotic bubble of eye-opening culture and natural beauty that inspires an open heart.
This year it started with the wild-flowers, as if Mother Nature was making up for last summer's trauma by saying, Hey! Check this out! Let me show you how pretty, how gentle I can be. Afternoon light casts long green shadows down the slopes of Mt. Manuel. Morning sunshine splashes across the ridges. Itty-bitty quail scurry across dirt roads, orange and blue koi jump for breakfast in our pond, wild purple iris bloom in the forest. Walking barefoot feels natural again, and (dare I say it?) the joy of being buck-naked in the great outdoors returns to us.
As I snuggle under soft cotton sheets in my moonlit bed, the scent of night-blooming datura dances towards me, filling my breath with its indescribable nocturnal fragrance. Initiates seeking visions love this plant, whose delicate, pale yellow bells draw the night pollinators to them with their gorgeous essence. Breathing deeply, I slide peacefully back down into the land of dreams. 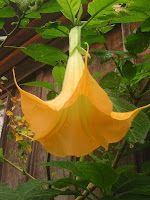 Photos by Toby Rowland-Jones
Photo of Captain Cooper School dancers by Laverne McLeod
Posted by Linda Sonrisa at 3:05 AM No comments: