and my world is about to change, forever.

It's a hot summer night, one of the few we've enjoyed this year. Earlier in the evening I light a few candles in my bedroom, burn piñon incense, pray and dance.

At 3am, I decide to venture forth to our outdoor bed to gaze at the billions of stars in the Milky Way. I've left the bedroom door open, to better hear the crickets. (The screen door is broken.) As I get up to go out, holding my stuffed bunny, pillow and blanket, I notice my small Siamese cat, Minnie, peering into the corner of my altar, a low table in the corner of the room beside my bed.

Looking down with her, I think I'm going to see a mouse, or maybe a bat. But no. What I see is full-grown, darkly vibrating RATTLESNAKE, twisted around my sculpture of the Egyptian Goddess Hathor.

What follows next is a blur, even to me now, weeks later. (I'm still recovering.) I grab the phone and start dialing my husband (but he's out of town.) Then I call my closest neighbor Jim, and leave him a long, abject message. Suddenly I grab a pair of kitchen tongs, hearing my husband's voice in my head: "Man up, darling" I can handle this! Yeah right.

When I go back into my bedroom, tongs in hand, the cat is closer to the snake. I scream, and guess what. IT RATTLES. That DOES IT, I think. And I run out of the house into the warm night...to meet Jim, who is running towards me down the path, to help. We collapse together, hugging. My head tucked under his arm, I hear his heart beating, fast.

"Let's go get Richard," we say, in unison. "He has guns!" So we do. We stumble down the path to Richard's tiny cabin. He's our local cowboy, and has taken on the mantle of Partington Ridge elder statesman, a deep source of local lore. He's sitting up on his cot, wide awake. "We have a situation," we announce, and as we give him the details, he picks up his shotgun.

"We don't want to blow a hole in her bedroom wall!" Jim says. Next Richard hands him an enormous machete, and says, "Good luck," to which I reply, "Oh no, you're coming with us, Mister Snake Whisperer!" Then he pulls a handgun out of the pocket of his work jacket. "That'll do it!" we say.

Jim (machete in hand) and I hurry back to my bedroom door, hoping that the snake is still curled up on my altar. It is, and I have moment of sadness for the poor beastie. Did not pick the right place to take a late-night nap.

Richard appears, in full wilderness gear, and pulls out the small gun. "Cover your ears," Jim says, and I stand outside in the cool grass and watch Richard fire several shots into the corner of my bedroom. Pop. Pop. Pop. Pop. Pop. There's no rattling so I assume he's got it. "Did you get it?" I ask, and Richard says, "Well...no." "WHAT? ? ?" I reply, astonished.

He begins to move the baskets under my altar with the machete. "Ah, I hit it," he says, and as I turn up the lights in the room I see a few drops of rattlesnake blood leading...behind my bed. The reptile seemed to know (horrors) where it was going. It's a captain's bed, so Jim and Richard pull back the mattress and Richard fires another couple of shots at the snake, huddled on the carpet, trapped between drawers...Finally, it's dead.

We carry it outside on the machete, which Richard uses to administer the coup d' grace. I carefully place it on the barbecue grill and close the lid. We stand around for a few moments, stunned. And then I say to them both, "You know, this is bad, but, um, I could really use a drink!"

Not missing a beat, Jim points towards my kitchen: "You've got some Jack Daniels there." So we open it, and drink a few shots together. "These are the times," Richard laughs, as he pours himself another tumbler of the golden liquid. As the laughter and the stories begin to flow, I realize how right he is.

I admit to them, "Don't leave me!" knowing it will be many, many hours before I can sleep again. As we decompress and share what's up in each of our worlds, I'm aware that these two crazy guys are really my family now. Family shows up when you're freaked out, takes care of you when you're threatened by your fears, and laughs with you to bring you back to more ordinary reality.

Later, I dance alone by candlelight as the dawn light gently fills the house. I'm wearing my gardening boots and pink sleep-shirt, and I stomp out a special (middle-eastern, of course) dance for my altar-snake. The primal energy of adrenalin still pulses through me.

When, a few days later, I ask my shaman friend what this episode could possibly mean, she looks at me searchingly, seriously, and says, "I think it means...keep your door closed at night." After laughing her wise-woman laugh, she adds, "That creature sacrificed herself so you can become more awake to the transformative mojo of snake medicine." To which I say, "Thank you, Madame Snake, for the powerful gift." 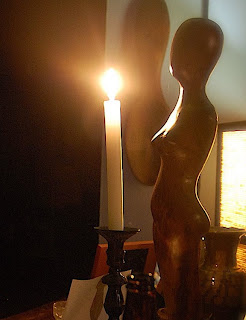 "Snake, come crawling
there's fire in your eyes.
Bite me, excite me,
I'll learn to realize:
the poison transmuted
becomes Eternal Flame.
Open me to heaven
that I may heal again"