And another thing I love about this town

There's something profound about living in a place that draws people, like the proverbial lemmings, to stare at the horizon. It helps to remember this in late summer as tourism reaches its highest (some would say intolerable) level. Inns and restaurants are full, hikers and campers frolic everywhere, and the traffic (on the mere two lanes of Highway One) is, as they say "challenging."

Free associating lemmings with tourists, I found an interesting fact: "Driven by strong biological urges, they will migrate in large groupings when population density becomes too great." Since I began my exploration of Big Sur as a tourist as well, naturally I can relate. The city is crowded and dangerous, and travelers need a bit of sky.

Fortunately, circumstances are not so dire that the tourist / lemming jumps off the cliff (though this does happen.) Apparently the tribes of lemmings that have been observed jumping off cliffs are not committing suicide en masse but are swimming to new territory. Hawaii is a long way away, so our beloved lemmings (I mean, tourists) are stuck on the tops of the cliffs, gazing at the sea and sky, awestruck.

There's definitely a magnet in that horizon, and seekers who feel (consciously or not) their divine discontent come to this dramatic landscape to find...something. I watch them this time of year, looking for answers in a sunset, a hug, or a romantic kiss just as the sun sinks slowly into the Pacific, like an old man at a spa (to quote a friend of mine.)

How many photographic moments have I witnessed, driving on Highway One, that go on to be enshrined on mantel or desk, recalling the bright happy day, the ocean, the smell of the surf, that kiss? It's an honor to quietly observe people making memories, each one unique, unforgettable.

In my new role at the historic Deetjen's Inn, I get to participate, one might even say, co-create, some of these memories. I remember the glow that I carried with me from Big Sur, when, after soaking in its raw beauty, I had to return to an urban world. To see people relax over a good meal, or sense the calm that emanates from them after a refreshing night's sleep, is lovely. 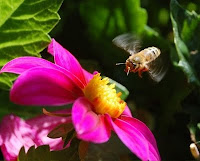 Here's an RX for civilization: a few days without computers and cell phones, time spent hiking up canyons or down streams to the beach, sitting in the sun on a deck under the redwoods, reading journal entries from visitors past, or just staring at a flower in a Big Sur garden with fresh eyes.

And then, after the photo ops, the stories come: Everyone has a story and this place is an Innkeeper's paradise in terms of the treasures people offer up to share, every day. It's a phenomenon I've seen with guests at my home too: something clicks in the soul and deeper truths emerge, easily, sometimes with humor.

Human perspective is granted as people observe the vast perspective of sea, earth and sky. It's as if the eye sees the view, and then, when the mind takes it in shortly afterwards, understanding comes. Big Sur really is a place to both lose and find yourself, and perhaps we can thank our primal lemming-like instincts for that powerful gift.

Wedding on the Mountain

It's been a busy few months: I'm learning a handful of new jobs, studying dance more, traveling a bit and then, last weekend, we hosted the wedding of a gentle young couple, the son and now daughter-in-law of dear friends. 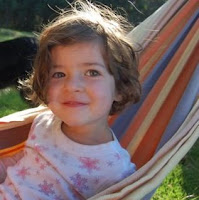 Without a doubt, the BEST part of living here is sharing it with kindred spirits, especially those under 10. The parents of the groom have 3 year old twins, Max and Chloe, and spending time with them prior to the nuptials was priceless good fun.

Ryan and Jami met several years ago in Big Sur at John's (Ryan's Dad) marriage to songstress Camille (Mother of twins.) My husband Toby was the first soul they told of their engagement (which also happened here) so marriage under what we've nicknamed "The Wedding Tree" felt natural. 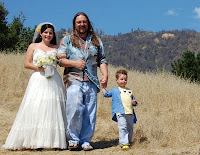 On Saturday afternoon, a small group of friends gathered, and in a tender twist, the father of the groom walked the bride down the aisle, in this case a freshly manicured dirt path, with son Max tagging along beside them.

Veteran officiant Penny Vieregge, who's wedded dozens of Big Sur couples, held the space for a lovely ceremony. Much champagne was tippled, and happy, copious tears were shed during the big moment. Feasting, toasting and dancing commenced until the wee hours. Being a shutterbug, I took hundreds of pictures, thoroughly enjoying the process of documenting the joy. 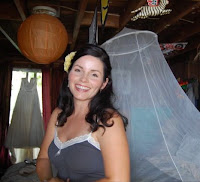 Since we can never get enough of the Bride, here she is again, pre-ceremony, with that all important dress in the background...Doesn't she look like the cat that ate the canary? But then, all happy couples on their wedding day have that timeless, contented-cat glow.

Old chums Toby and Penny share a festive laugh under the elm tree. It doesn't get cuter than this: fire-fighters (Yes, Penny started the BSVFB Cliff Rescue Unit) all dressed up and having a ball.

Weddings are one of our most powerful community rituals, certainly the most enjoyable one. They're opportunities to express gratitude for family, to honor the cyles of life, to bask in love. With Dad also contributing the Christo-like installations down the bridal path, and with the Big Sur sun smiling down on them, Jami and Ryan were blessed with a beautiful beginning. We wish them much joy, always. 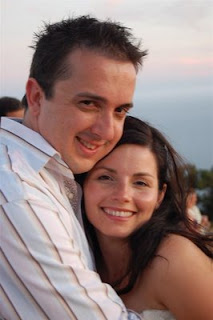 My date with King Tut 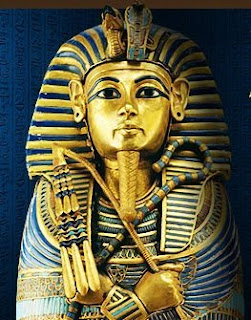 Ever so often, we country mice make the long drive up to San Francisco for cultural events. Last Friday night, I had a date with King Tut, Egypt's oldest and best ambassador, courtesy of my dear friend Janet, who treated me to my ticket for my 39th (again!) birthday.
You might think I would be intimidated, what with him being immortal and all, but then, he was only 19 when he died, mysteriously, perhaps the victim of a wicked step-mother (Nefertiti) who wanted her way in the royal court. (Tut's death is one of the world's longest unsolved crimes.) He seemed to be a daring, ambitious and extremely fortunate teenager, the kind of charmer that always catches my eye.

Bright lights, big city, to use a now well-worn phrase. Yes, it has its charm and it draws me, a different high than the primal, majestic bliss I feel in Big Sur. House-sitting for a friend, I spent many hours on Saturday morning (in the fog) in the bath-tub in her garden, and in the dark wee hours of Sunday (watching the fog roll above the sparkling lights below.) And of course, in between walking the dogs (and following those nasty urban rules about you-know-what) I bought a pair of delightful new shoes. Yay!

But back to the magical evening with the King. Since it was a date, after all, Janet and I dressed up, and giggled together as we began our tour of the tomb, listening to Omar Sharif's sonorous introduction to the riches within. Something about the City makes me impatient, so while I mused over the relics relating to Tut's immediate family in the first galleries, and enjoyed the shabti, or funerary statuary of his relatives, meant to protect them and do their chores in the afterlife, I basically made a beeline to the heart of it all: an amazing chamber filled with the golden treasures of Tut's inner tomb.

Along the way, having forgone the audio tour, I enjoyed something I always love about museums: those casual contacts with fellow exhibit fans: the funny conversations we have about whatever comes to mind as we stare at 3000 year-old-plus relics, two kids sharing headphones bickering over which direction to go, or the way older people sigh as they pause in front of a brilliantly lit case, taking in some domestic artifact with a deeper level of feeling. Then there was the museum guard who was a dead ringer for Nefertiti herself. In the darkened funeral chamber, I could have admired her tranquil face and quiet smile for a long time, too. 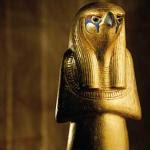 While the romance and power is undeniable in the main chamber "Everywhere the glint of gold" as British archeologist and explorer Howard Carter said (thank you British Empire for creating a leisure class that could re-discover the ancient world for us) what really gets me are the more prosaic objects, those that tell a subtler story: The child's chair with the reed seat base slightly indented, the golden walking sticks, the game boards, head-rests and unguent bottles. Those objects that were part of daily life, that absorbed the energy of the people around them in a more familiar way.

Now when I look at my cheap brass bangles they recall the designs of venerable Egyptian artists. I see the soft gold of my chocolate bar wrapper in a different light, imagining it to emerge from the depths of an as yet undiscovered crypt. The exhibit's use of enlarged black and white photographs from the 1922 un-veiling of the tomb are remarkable too: they give a sense of the suspense they must have felt, approaching the entrance in the Valley of the Kings, and the glorious chaos of what they found.

In the last gallery, I feel the sadness of it all. A photo of Tut's sarcophagus, with his X-rayed remains inside, revealing a human man, after all, underneath all the pomp and glory, gone. An untimely death, even one that happened 3200 years ago, still carries grief. Then, in this last, stark gallery I hear the strains of joyous music and people laughing. We emerge to find children dancing, friends in the audience, a full bar and LIFE! This was the De Young's gift to us, their Friday evening program, this night featuring the Georges Lammam ensemble performing middle-eastern music. Rashid, a SF-style male dancer was introduced as King Tut (to the delight of the uninhibited little ones dancing below center stage) and later the lovely Shoshanna shimmied for us, dressed in a delicious pink costume that undoubtedly left many little girls (of all ages) dreaming of belly-dancing themselves.

Somehow being around death in this intimate, ancient way, left me feeling energized, alive, and more present. We are so very, very lucky to be here now, no matter what. As my friend, gifted drummer and Sufi poet Antoine Lammam says, "Short life or long life--good life."

Now, when I close my eyes at the the end of this long day, I see the golden statuary of the tomb of the tender boy king, and feel the cold of the mausoleum-like museum space at the De Young. These dark, mysterious images contrast beautifully with the golden mountains of Big Sur that live inside me too. Especially at this time of year, the north and south views from the top of the ridge, bright white sunshine on the gray - blue ocean, hills that flow down to the sea, the warmth of the earth coming up at me in waves. Magnificent death and life, in equal measure. 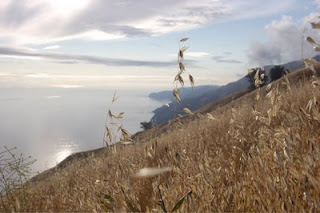