Painting at the Kitchen Table 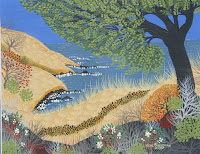 Painter Celia Sanborn's garden echoes her exquisite landscapes: botanical details in the foreground, with swaths of forested canyons rolling down to the sea.
When she sat down to paint a hope chest for her niece 7 years ago, Celia had not taken an art class, or imagined she was starting a new chapter in her life. She simply bought the brushes and paints and began. Because she works in fast drying acrylic, this first effort caused frustration, and she almost stopped right there. But her husband Ray said, "No, no, don't stop. Let me sand it for you, and you can begin again." Finding her vision on that second attempt, Celia's new passion took her by surprise. She's created dozens of works since that day. 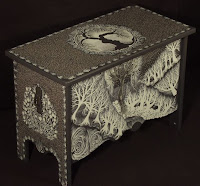 She began by painting chests, tables, benches and chairs. One day a friend who is a professional framer told her that what she'd put onto a table would be beautiful as a framed piece of art on a canvas. Though doubtful, she began, and we are the beneficiaries of the wonderful result! Celia's paintings take you deeply into them. The level of detail, painstakingly created, give them power. You are there under that tree, beside that flower, next to that sparkling wave.

For many of us not fortunate enough to be born in Big Sur, it's an image of the place that haunts us in the years before we emigrate here. A painting, poster or card depicting a little piece of paradise, soothing our souls before we realize, hey, I could live there. Then the real adventure begins!

For Celia, who has lived in Big Sur since she was a newborn, the landscape is her. This amazing life experience is now pouring out of her, with wondrous precision. She says she has something to express, but more than most artists, she is bringing forth a bountiful cornucopia of delight, of being in this land, savoring it, knowing it, loving it. You feel this when you look at her work, and that is the great, transcendent gift of her paintings.

Celia's parents, Selig and Helen Morgenrath, met during World War II in New England where Selig was working as a lumberjack in a conscientious objector camp. Helen, studying pacifism at Smith College, spotted him there on a field trip. They met again in New York City, married, and took up residence in Harlem, where they decided they needed to find a more rural place to live. They traveled across the country to Los Angeles, then, in 1949, went north, as Celia puts it, "Looking for trees." They found them in Big Sur.

The Morgenrath clan is famous here: builders, teachers, artists, firefighters, businesspeople. Selig Morgenrath built much of Esalen Institute, and Helen, now 82, still performs in Japanese Noh theater. Selig was born in a small village in Poland, where the men were weavers by trade. By all accounts, he was a genius, someone who could do anything simply by applying himself. Celia says she felt close to him when she began to spontaneously create, much as he did, sitting down at the kitchen table and simply beginning.

"My parents did what I feel parents should do: instead of only feeding and sheltering us, they were teachers." She learned about the natural world from them, and there were always materials in their home for art-making. Coming to her own fulfillment as an artist later in life, having worked as an innkeeper 6 days a week for 20 years at the Ripplewood Resort, as well as raising two boys, Celia is keenly aware of the psychological challenges of producing art.

Her process reminds me of the guidebook, Art and Fear, by David Bayles & Ted Orland, a slender tome which addresses the "perils and rewards of art-making." The uncertainty which assaults any artist is palpable, perhaps especially in a conscientious person like Celia. She bravely faces her self-doubts in exchange for her flashes of wonder. "My work is constantly evolving, and it's a mystery to me" she says, and in Art, like Life, you just have to fully embrace what is in order to gain satisfaction. Behind obstacles one finds treasures.

She weaves a tapestry in her paintings, each one taking copious amounts of time to complete. She paints the foreground on top of the background, so the tree covers the grassy hillside as in real life. The intimate scenes and dreamlike landscapes are reminiscent of Mexican painter Frida Kahlo, while her meticulous, layered execution recalls the 19th century Neo-Impressionist painter Georges Seurat. Celia dreams of eventually creating a children's book showing scenes of traveling through a pristine Big Sur, before there were roads, buildings or people. Here I think of Islamic art, which allows no representation of humans, just glorious repeating patterns, which, as in the natural world, give a soothing feeling of connection and harmony.

In Big Sur, you can find Celia's paintings primarily at the Del Campo Gallery, but also at Local Color. She and her husband Ray plan to craft a web-site representing her work. The business name they've chosen? Surprise Canyon Studio.

Posted by Linda Sonrisa at 7:31 AM

oh oh, I want to see these paintings so bad. (I am desiring pleasure, I guess). I love how the grasses overlap the sea.

I just bought Celia's Oak by the Coast painting and feel so lucky!