Last weekend, I attended a Quinceañera for my friend Pepe's daughter, Christal. It was a privilege to attend the special Mass at the St. Francis of the Redwoods chapel just off Highway One, and see Christal, Pepe, her brother Fabian and mother Lupe all in their finery for this traditional celebration of Christal's 15th birthday.

Anglos, especially Anglo women that I've spoken to, are fascinated with the Quinceañera, since we have nothing similar. While a Catholic ritual in Hispanic culture today, there is some evidence that it was originally an Aztec rite of passage to celebrate young womanhood! Either way, the involvement of the whole family in honoring the feminine—Dad, Mom, siblings, godparents and community—make it especially tender. 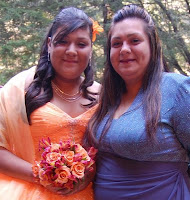 Since Christal's birthday fell on the day before Palm Sunday, several congregants waved beautiful green ferns in the aisles. There was a lovely song about God granting us peace, which I sang as loudly as I could, and it was wonderful to see my quiet new friend Julia read the crowd from scripture, signing off with "word of God", "palabra de Dios."

With my Spanish, I could follow the church ceremony fairly well. The priest, dressed in scarlet robes, spoke about the importance of respect and tradition, of keeping God in our hearts, not just in church but in our day-to-day lives, too. He even paused to let us all listen to the bad boys chattering in the back of the assembly. 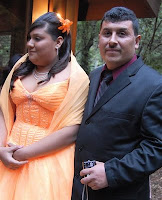 But my favorite part was the loudly hicupping toddler behind me, a chubby little guy in a brightly striped shirt. At one point we all greeted each other with big smiles and warm handshakes, something I remember from the Protestant services I attended eons ago. There's always someone new to you who pops up in these moments, and the kind face of a stranger can be illuminating.

At the end of the service, Christal gave her saffron and flame-colored roses to the Virgen of Guadalupe, and we all sang about the beautiful Mother, full of love for us all. Later, we went to the Grange Hall for an abundant feast of carnitas, frijoles, tortillas, salad and deliciously hot salsas. A 7 piece Mariachi band performed for the occasion, and everyone chatted happily at the long tables set up in the hall.

Little children ran about on the dance floor, batting each other with balloons, and small boys jumped up over and over to capture the orange and white helium filled globes that were trapped against the ceiling. Of course, you spotted them later, inhaling the gas, talking in squeaky voices. We were served coca-cola and fruit juices, but the men who ventured outside were drinking something stronger, as evidenced by the reddish tint in their eyes when they sidled back indoors.

Sweetest of all, in honor of the maiden who emerges from her chyrsallis at 15, proud papa Pepe had painted an enormous vibrant orange butterfly for Christal's throne. Joined by her best girlfriends, she reigned for the evening like the queenly young lady she is now.

Next? Prima Alondra and Tio Fernando. 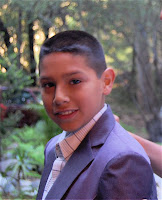 Thank you Linda for sharing your experience here. What a honor for you to witness and be a part of this special celebration and ritual that I too have always been curious about and slightly envious of.
Beautiful photos. I especially love the butterfly throne!