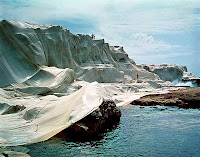 I've been thinking about the globally known, innovative artist Christo lately, and that he should come and do a large scale environmental art project here in Big Sur, kind of like his 1.5 miles long, 1 million square feet of Wrapped Coast in 1969 in Little Bay, Australia. He also Surrounded Islands in Key Biscayne in 1983. Hey, it's only about 20 miles from from Lucia Lodge to the Nepenthe. It's worth exploring, don't you think?

A Christo coast would be an artsy rendering of Big Sur that could also prevent avalanches of earth and rock. The generally accepted viewpoint among experts and most locals is that we're (more or less) going to see Big Sur slide into the ocean with this winters's rains, shutting down the highway and trapping us here. Not so bad, you say, until supplies (and bank accounts) run dry.

This makes for an interesting quasi-PTSD experience to the Basin Complex Fire, which denuded the mountains of stabilizing flora, and promises to fill our rivers and springs with sediment from over 200,000 burned back-country acres.

I'm wondering how "erosion control fabric" (used in the Australian installation) fares against steel mesh in keeping the rocks at bay. I'm grateful for CPOA, our valiant non-profit community group that has worked tirelessly with an alphabet soup of government agencies to mitigate the upcoming hazards and educate our bilingual population about flood and landslide risks. 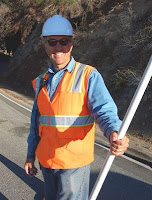 Also impressive are the construction teams who, among other things, are coordinating the massive project of helicopters hanging curtains of steel along the unstable cliffs, as if they're capturing some unpredictable animal beneath a net.

Yes, that's it, Christo needs to wrap our Big Sur coast in Cal-Trans orange, just in time for Halloween! The kind of saffron color he used in the Central Park Gates in 2006. (In the world of blogging fantasy, it can all be done by the end of the week.)

Think how beautiful the coastline would look at sunset, Big Sur dressed in flame-colored nylon, contrasting with the cobalt blue of the Pacific Ocean. We have a few years of potentially disastrous landslide scenarios. Let's get word to Christo and his wife Jeanne-Claude about this. My bet is that they'll a) think we're bonkers and b) seriously consider helping out!